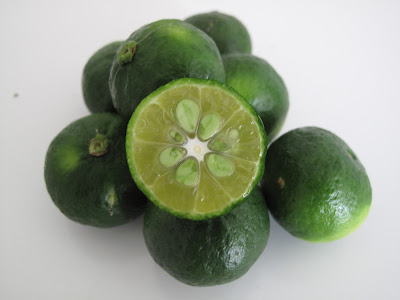 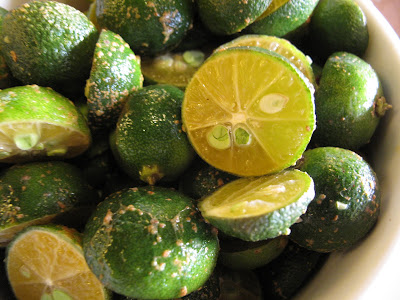 Shikuwasa and Calamansi Lime -can you tell which is which? Calamansi is such a necessary ingredient in Singapore cuisine that there are no substitutes. I find the flavor, a cross between orange and lime -according to The Oxford Companion to Food by Alan Davidson, it is "a hybrid of the MANDARIN orange and the KUMQUAT." -no wonder. It is a Filipino fruit in origin but somehow made its way all the way to Singapore -thank you Philippines! I definitely cannot imagine beef noodles, chicken wings, cze char dishes, etc. without it. Shikuwasa looks like calamansi lime in appearance but if you cut it open, it looks more like lime and like calamansi lime is to SE Asian cuisine, it is an essential ingredient in Okinawa cuisine which is highly unique and deserves much limelight. Compared with calamansi lime, shikuwasa does not have that tangerine-ish note but more limey and much more acidic. Can't buy them all year round in Tokyo but it usually reaches the market during summer time.
投稿者 Shigeki Koshiba 小柴茂樹 時刻: 15:53 0 件のコメント: 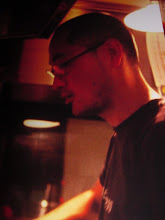